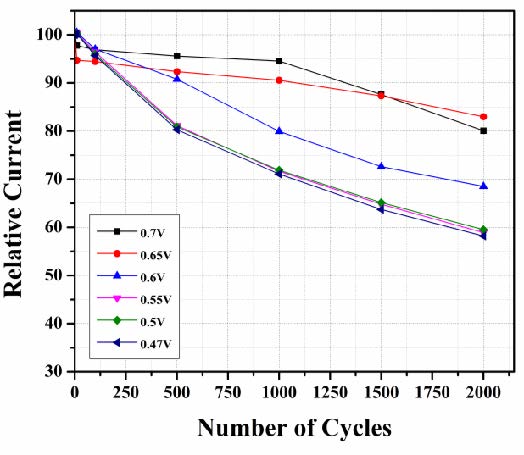 catalyst, a promising metal-free electrocatalyst exhibiting the potential to replace the noble

metal catalyst from the electrochemical systems; such as fuel cells and metal-air batteries.

The catalyst was synthesized with a planetary ball milling method, in which the precursors

and time. The N-G/MOF catalyst not only inherited large surface area from the ZIF-8 structure,

but also had chemical interactions, resulting in an improved Oxygen Reduction Reaction (ORR)

still had some unreacted ZIF-8 particles, and the high catalytic activity of N-G particles decreased

the decomposition temperature of ZIF-8 in the N-G/MOF catalyst. Also, we present the durability

medium. Remarkably, the catalyst showed no change in the performance after 2000 cycles in the

N2 environment, exhibiting strong resistance to the corrosion. In the O2 saturated electrolyte,

attack of the ORR intermediates.